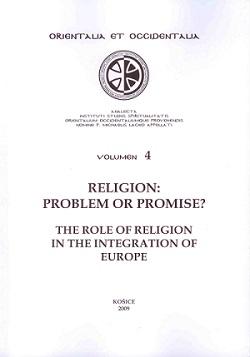 Religion problem or promise – cover.jpgOn September 11th and 12th 2008 the SCRIBANI conference on “Religion: Problem or Promise? The Role of Religion in the Integration of Europe” took place in Kosice, Slovakia, on the initiative of the ‘Michael Lacko Center for Spirituality East – West’. It brought together the members of the network and scholars from Eastern and Western Europe for an encounter aimed at forging a Jesuit contribution to the social construction of Europe. This publication presents the texts of the lectures from the conference.

It starts from a general conceptual reflection on what the role of religion should and should not be in the process of integration of Europe. In part I ‘The Role of Religion in Europe’ theologian Edward Farrugia SJ and philosopher Volodymir Turchynovsky, inspired by their respective western and eastern traditions, underline the inherent force of religion in building an inclusive, open and tolerant society. How this is put into practice not without difficulty is illustrated by the contributions of Jan Dacok SJ, Provincial of Slovakia, legal researcher Kolja Naumann and scholar in culture and religion, Serge Traore, through an analysis of the public debate surrounding bioethical issues, the preamble of the European constitution and the way the issue of migration is dealt with.

Part II of the publication ‘Secularisation in Europe’ continues with a comparative empirical analysis of the degree of secularisation in the different member states by John Madeley, expert in government politics and economics and an analytical reflection on the presumed general secular nature of the European Union by sociologist David Martin.

Whereas parts I and II of the publication set the frame for the discussion, parts III and IV illustrate the questions raised by means of a broad spectrum of concrete cases from East and West, which were presented at the conference in various workshops. They address such issues as intolerance of the state towards external symbols and expressions of belief, discrimination of religious candidates for public functions and rise of religious extremism in Slovakia, the religious nature of social values in the Czech republic, the resilience of the Orthodox Church in the public space in Greece, the headscarf controversy and the change of the religious landscape in Germany after the reunification, and the migration policy in Spain.

In the concluding part V of the publication, ‘Challenges for the Future’, policy consultant Dusan Bella, social and political scientist Guido Dierickx SJ and philosopher Patrick Riordan SJ point out the political, social and ethical issues at stake in the construction of the European Union and highlight the necessity of the Church to be involved actively as a political actor in the debate.

back to publications
