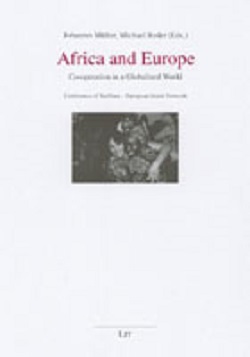 AFRICA AND EUROPE.
Co-operation in a Globalized World | 2007

In Europe, Africa is often called the forgotten continent. The collapse of states, violent conflicts and natural disasters shape the public perception of Africa in Europe, while the political perspectives tend to be grossly neglected. This book wants to challenge this image in the eyes of many people through a profound analysis of the main aspects of African-European relations (e.g. economics, migration, HIV / AIDS). In particular, it will be discussed what can be done to improve the relations between both continents and to develop a constructive and genuine cooperations.

The book is based on the presentations and discussions of a congress of the Jesuit Scribani Network.

Part I: African and European Relations
Shirima, Valerian – The Relationship between Africa and Europe
Short, Clare – Ways of Cooperation between Europe and Africa
Eibl, Sylvia – Reflections on the Preliminaries for Improving African-European Synergies

back to publications
