Public Lecture and Workshop on “The Roma in Europe”, Antwerp, October 2009 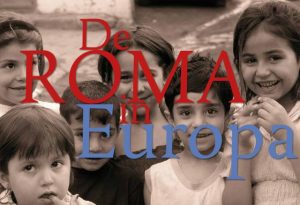 In the framework of a meeting of the SCRIBANI network, a Jesuit reflection forum for social justice in Europe, UCSIA organized a lecture on the situation of the Roma in Europe, which was attended by Roma representatives, social workers, researchers and the broader audience.

Tommaso Vitale, a sociologist of the University of Milan involved in field research on the Roma, opened the session with images of Roma communities. The general perception of the Roma is one of extreme poverty, shanty towns and folk tradition, seldom successful Roma are portrayed (Holiday on Ice is managed by a Roma family and FC Milan has a Sinti player on its team). In every town of Europe we find heterogenic, but segregated Roma groups whose societies are marked by stratification (not all Roma are underclass, there is also a bourgeois elite), strong kinship relationships (through worldwide endogamous marriages), affiliation to various religions (Evangelical, Orthodox and Muslim) and a great ability to adapt by using combined resources from their surroundings. The level of anti-gypsy sentiment in Europe is surging (even among those, -many of them highly educated- claiming to be tolerant towards other ethnic differences). Where does this widespread repulsion stem from? Historical prejudice does not explain the phenomenon (before WWII they were relatively integrated which is reflected in the lower degree of prejudice of older Europeans). Regional differences in attitudes are partly inspired by the local policy approach (more aggressive policing, eviction and segregation strategies fueling negative perceptions). Roma support groups tend to offer aid and assistance without structural solutions and their paternalistic approach undermines the dignity and autonomy of the Roma.

Ivan Ivanov is executive director of the European Roma Information Office (ERIO), which was established four years ago by members of the European Parliament and experts on Roma issues, following the European enlargement, out of a concern that the Roma issue, considered an Eastern European matter, would now attain Western Europe. ERIO’s initial aims of advising policy makers and informing Roma communities of European regulations, evolved towards advocacy against racism and discrimination, networking and capacity building with input from the Roma themselves and non-Roma social support services.

The Roma are considered from North-West Indian origin and came to Southern Europe, but then moved to the Ottoman Balkans where a more tolerant climate reigned. The first international Roma movement was created in the late 1960’s-early 1970’s and culminated in a conference in London where it was decided to discard the negative connotation of ‘gypsy’ and call themselves ‘Roma’ instead and a Romani anthem and flag were inaugurated. A new Roma elite stood up, demanding equal rights.

That the Roma face severe forms of discrimination is harshly illustrated by the case of Italy in its racial profiling (the Roma are only group of which fingerprints are being registered) and unlawful eviction (European legislation prohibits expulsion on other than criminal grounds). That is why ERIO proposes to develop a multidimensional minimal standard for EU-member states for dealing with Roma groups, to be translated in local policies with Roma input. European investment in Roma issues do not rear the expected results because of a lack of intercultural communication sensitivity, paternalism and stigmatizing approaches. Again it is important to involve the Roma themselves in the design of the programs.

This should put an end to the administrative and social invisibility of the Roma, which forms the largest minority in Europe with 10 to 12 million people.

Brendan Mac Partlin, social apostolate delegate at the Congregation for European Provincials (CEP), opened the session by presenting the Jesuit know-how on Roma in Europe, which was recently evaluated at a meeting he convened. There are about 20 Jesuits active in this apostolate for the poor, of whom half live with Roma. CEP will continue to coordinate this action in the field and try to disclose the existing know-how to a broader public.

Natasja Naegels, who works for the Antwerp Centre for Minorities, has been focusing exclusively on the integration of Roma children into the Belgian education system for the past six years. She gave us an overview of the situation of the Roma in Belgium, the problems they confront and possible solutions. Focusing on the Roma groups from Eastern Europe and the Balkans, who arrived in Belgium during the last ten years, the diversity from city to city is apparent: in Antwerp the main group are Muslim Roma from Kosovo, in Brussels Pentecostal Roma from Romania and Ghent receives mainly Czech and Slovakian Roma. This requires diversified social support and specialized mediators. On the whole, Belgium counts about 20.000 Roma, of whom 70 to 80% are illegal. Their number is still increasing, e.g. through import marriage. There is no settlement segregation policy in Belgium and they live in the poorest neighborhoods of the city. The Antwerp Roma community, which is Muslim, tends to grow closer to other Muslim minorities, out of a shared sense of exclusion from society. It is a young population (most families still have 10 children or more), marked by a low life expectancy and multi-problem living conditions. They tend to reduce their proper problems to financial and administrative matters. The Roma are different from other groups in need of social assistance because of their refusal to participate, their lack of trust in services offered and the strict division they uphold between Roma and non-Roma (gadzje). They tend to identify themselves negatively as non-gadzje.

Education is an essential tool to participation, but most Roma children do not attend school on a regular basis. It is a big step for illiterate parents to send their children to an institution they never visited themselves and children are a source of income, joining their parents on begging and stealing rounds. To get them to school one needs to negotiate with the parents by letting them take the children with them on some days and sending them to school on others. Sometimes this is successful as in the case of two mediators in Brussels obtaining school participation of 70 children.

Solutions to this problematic situation are to be sought in training social assistants and welfare workers in intercultural communication, trying to understand Roma ways (e.g. they have a strong sense of negotiation, humor and performance), in investing in more school mediators and adapting the school system to meet the needs of illiterate children, with special attention for young girls. This should urgently be put on the agenda.

Tommaso Vitale, sociologist at the University of Milan investigating the Roma issue, added the following reflections. The Roma have a unique network logic, based on the concept of ‘mare roma’ (human for Roma; ‘gadzje’ means ‘not human to Roma’) and want to preserve their way of belonging (which is to be distinguished from wanting to preserve an identity based on ethnicity and nationality). Marriage is central and the education children receive turns around skills needed to marry and preserve the network (cf. public presentation and dance). Public education may be the solution for participation in society but this presupposes listening to their worries and understanding the suffering that accompanies immersion in a system which is so different from theirs. The solution starts where we start listening to them to overcome paternalism, stigmatizing and emotional asymmetry. Sophisticated policy design will be necessary to target the Roma but not only them (e.g. mediation training for Roma should be broadened to all poor and marginalized groups). A variety of policy instruments (leaving aside ethnic behavioral instruments) will be needed (e.g. do not limit the labor market approach to traditional trades). A new culture will have to be developed around the Roma issue and they themselves have to be given voice (e.g. by including their reflections on research results concerning gadzje attitude towards them).

The audience reacted with the following questions and remarks:
Given the diversity of Roma groups, what is their base of communality (anti-gadzje sentiment, memory of common origin, creation of ‘national’ identity through symbols of flag and anthem?)
Given the success of the Evangelical Church, what can the Catholic Church learn from this?
What is the position and influence of women?
We seem to need the Roma to overcome our general fear of the ‘Other’ and reread our own history.
In Kosice, Slovakia, there is a gypsy conservatorium with Roma and non-Roma teachers, attended by Roma and non-Roma students, which shows that it is possible to live and work together.

The speakers, -including anthropologist Maurits Eycken, who wrote an article on Roma and religion for SCRIBANI-, responded as follows:
On the issue of the base of communality: they all profess a particular social form of belonging to smaller families within wider groups, based on trust. Most of them share the Romani language which is close to Latin. There is no recognition of a common identity (cf. Sinti and Manoush refute the identity politics developed by Eastern European Roma), nor do they have a common history (cf. Caminante group in Sicily, Sea Gypsies in the Baltic Sea, Swedish groups, which are not of Indian origin). They do not have a common strategy (cf. unsuccessful federation in Romani Union by Roma elite and strife between vested groups and newcomers in Western Europe). The Eastern European Roma elite borrowed the diaspora logic from the Jews of a nation without a frontier, return to a home nation in India and a common language (coded in the expression format of non-Roma), which did not appeal to mainstream Roma groups. The Roma not only define themselves negatively as non-gadzje, but also positively in a code we do not understand and in which endogamy forms a central marker.

On the issue of the Christian Churches: the Evangelical Church started training Roma priests and tried to put an end to criminality through spiritual education, which the Catholic Church never did. The Evangelical Church approaches the Roma on their capabilities, not their weaknesses. There is a federation of Catholic priests and nuns working with the Roma, but they do not provide an overall strategy. Evangelicalism is a gadzje religion the Roma borrow from in a very instrumental way, but when it comes too close and threatens their integrity, they will discard it.

On the position of women: the power relation within the couple cannot be evaluated accurately by us. Women hold power based on purity and sexuality, which is never displayed before gadzje. But there are some real problems, especially in the poorest groups, with very young import brides living as illegal aliens and house slaves, performing prostitution within the family. Because this happens in the privacy of the home it is very difficult to tackle the problem.

To conclude, it was asked how we can achieve to live together in a shared space.
A two-way approach of academic awareness informed through field experience and attention for the rights of socially weak groups is a good starting point, according to Brendan Mac Partlin, but this should lead to concrete action. Jesus went to the most marginalized and tried to help them in deeds.

European Provincial Mark Rotsaert thanked the speakers for their informative contribution but also for conveying their love for the Roma.
As to a Jesuit agenda on the issue of the Roma in Europe, he refers to the CEP social apostolate to continue to coordinate and support the Jesuits working with the Roma and proposes to integrate the topic in the agenda of the new CEP migration office led by Luis Munoz.
He invites the partner institutes of the SCRIBANI network to undertake some action and proposes the SCRIBANI network to continue its reflection on minorities and exclusion.

Manage Cookie Consent
To provide the best experiences, we use technologies like cookies to store and/or access device information. Consenting to these technologies will allow us to process data such as browsing behavior or unique IDs on this site. Not consenting or withdrawing consent, may adversely affect certain features and functions.
Manage options Manage services Manage vendors Read more about these purposes
View preferences
{title} {title} {title}